KEEPERS OF THE QUAICH 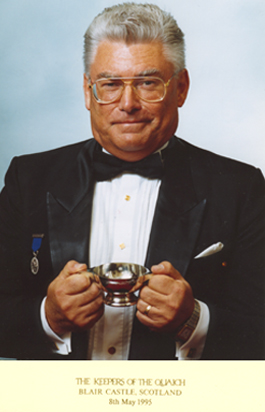 The Keepers of the Quaich is an exclusive non-profit making society, with membership by invitation only, for people with a positive record of association with Scotch whisky.

The society was established by the major companies in the industry to build on the image and prestige of Scotch whisky at home and abroad and, for the first time, the industry pooled its enormous resources and strengths to promote itself with pride.

As a Scotch whisky institution, charitable donations are from time to time, made to worthwhile causes benefiting Scotland and its people.

Founded in the Autumn of 1988, the organisation includes as its members leading representatives of the Scotch whisky industry and those who have contributed to the successful marketing of Scotch whisky in fifty-four countries across the world, together with noted Scotch whisky connoisseurs and characters. All have one fundamental link in common - a love of Scotland and Scotch whisky.

For some years Scotch whisky sales, and indeed the image of Scotch whisky per se, had been in decline. Conversely, other beverage types had enjoyed growth, in part at the expense of Scotch.

The time had come, therefore, for the industry to unite more effectively market their unique product so that once again Scotch whisky could become a powerful growth sector with worldwide sales expanding and jobs in Scotland created.

There were many different initiatives required to be taken individually and collectively by the industry to reverse the situation and many of these would primarily depend on the expertise of the individual Scotch whisky companies. It was nevertheless, strongly believed that a carefully projected and exclusive PR vehicle built around the aura, mystique and heritage of Scotch whisky would play a significant and positive part in helping to re-establish the image of Scotch whisky.

"To advance the standing and prosperity of one of Britain’s premier export industries, and to make more widely known its uniqueness, traditions, quality, service and benefits to the community it serves at home and in the markets of the world."

To build interest in, and add value and prestige to, Scotch whisky both at home and internationally.

To influence the leaders of the drinks industry in order to gain a greater amount of their time and energy in promoting sales of Scotch whisky.

To reward individuals for their services to the Scotch whisky industry.

To motivate and stimulate the press to project Scotch whisky in a more favorable and positive light.

To bring together and unite all areas of the Scotch whisky business and engender a greater sense of belonging.

In recognition of services to Scotland and the Scotch whisky industry, a limited number of carefully selected people are twice yearly invited to become members of this exclusive society.

Membership is conferred at an induction ceremony followed by a banquet at Blair Castle in Scotland.

The induction ceremonies take place in the spring and autumn.

The quaich is the classic small drinking bowl of Scotland, taking its name from the Gaelic cuach meaning ‘cup’. Although the name is Gaelic, this type of cup was known and used both in the Highlands and in the Lowlands of Scotland certainly since the seventeenth century and probably before. Its ancestor was the scallop shell in which drams of whisky were taken in the Highlands and Islands.

Like the shells, quaichs were always wide and shallow. The distinctive shape has been fixed now for possibly more than four hundred years. Traditionally made of wood, it is a shallow circular drinking vessel for whisky, with a pair of small lug handles projecting horizontally from opposite sides of the rim. The lugs, though functional, are of a unique carved style giving the quaich much of its special character.

The making of these cups was an intricate art by which the quaich was either turned from the solid or built up with tiny staves. The best quaichs, considered to be masterpieces, were built up with light and dark wood staves and bound round with withies or metal bands. The dozen or so staves of alternating woods such as plane-tree and laburnum were coopered together and also ‘feathered' into each other; this was a technique in which small slivers of wood were split away from the sides of the staves and slotted into equivalent parings cut in the opposite direction.

The centre of the bowl was usually decorated with a silver coin or an engraved disc or ‘print', with coat-of-arms, initials, motto or familiar phrase such as squab as e, ‘drink up’. The disc served the function of masking and sealing the centre of the bowl where the points of the staves met.

Quaichs began to be made in metal, whether pewter or silver and gold, in the late seventeenth century. Silver quaichs for example are first mentioned in the 1660s. When silversmiths began to make quaichs, they carefully and deliberately engraved radiating lines on the bowl in imitation of the staves of wooden quaichs and horizontal rings to represent the withy bindings. They also copied the lug handles in every respect.

For as long as there is any record of them - and that is from the early sixteenth century - drinking and quaichs have gone together. They w ere made in a variety of sizes, the largest surviving examples having capacity of about 1.5 pints. Larger quaichs may have been used for ale until whisky became the more popular drink in the eighteenth century. Whisky, deriving its name from Gaelic uisgebeatha, ‘water of life’, and quaich or cuach then became special tokens of Scotland’s individuality and her strong tradition of hospitality and celebration of times past and to come.

‘Uisge’ is the Gaelic for ‘Water’ and is the origin of the word ‘Whisky’.

Blair Castle the ancient home and fortress of the Earls and Dukes of Atholl is situated in the wide Strath of Garry and commands a strategic position on the main route through the central Highlands. It lies on the northern side of the Perth - Inverness road in a wild and romantic setting of forest-clad mountains and picturesque rivers. About a mile to the east, the Tilt, now crossed by the main road near the modem village of Blair Atoll, joins Garry on its south-easterly course to the Pass of Killiecrankie three miles away. The Banvie Burn, which runs in front of the castle, tumbles through its narrow glen among giant larches, Scots firs, beeches and colourful rhododendrons.

The Atholl Highlanders are the only legal private army in Britain and it is by kind permission of His Grace, 17ie Duke of Atholl, that the Highlanders mount a guard of honour at Blair Castle for the arrival of Keepers and guests for the bi-annual ceremonies and banquets of The Keepers of the Quaich.

In 1777 the fourth Duke raised a regiment to fight in the American War of Independence. They served in Ireland instead and were disbanded in April 1783.

In 1839 Lord Glenlyon (later sixth Duke) attended a tournament at Eglinton in Ayrshire. He was attended by sixty-seven Highlanders.

In 1844 Queen Victoria stayed at Blair Castle where a guard of Highlanders were mounted during her stay.

In 1845 she presented a pair of colours to the Atholl Highlanders thus giving them the right to bear arms.

After the First World War there were only two parades until the present Duke recruited some Highlanders in 1966, They parade formally only twice a year, unless by special permission of the Duke; once for the annual inspection and secondly for the Atholl Gathering which takes place in May. They have also provided guards for some members of the Royal Family and the Crown Prince and Princess of Japan.

In September 1987 the Atholl Highlanders toured some of the eastern states of the USA and in October of the same year some of the pipes and drums attended a British trade fair in Tokyo, Japan

In May 1991 a banner bearer and two escorts participated in the first reunion banquet of United States Keepers held at the Residence of the British Ambassador in Washington DC.

In May 1994 a banner beater, two escorts and the pipes and drums participated in the first reunion banquet of French Keepers at the Residence of the British Ambassador in Patis.

The Right Honourable The Earl of Erroll

His Grace, The Duke of Argyll

His Grace, The Duke of Atholl DL

The Right Honourable The Earl of Elgin and Kincardine KT

The Right Honourable The Earl of Mansfield

MASTER OF CEREMONIES (FEAR AN TIGH)